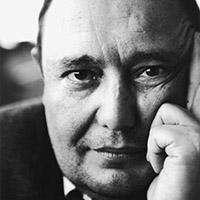 With almost 35 years of experience in Advertising, CRM, Shopper Marketing, Internet / Online and the Media Industry, Remy leads one of the top ten advertising agencies in Switzerland, while being a board member of the Mindshare Media Agency, Vice President of the Art Directors Club Schweiz, and actuating as a donor for the Zurich Film Festival.

He is passionate about social media and how to integrate these media into his client’s brand strategies.
Having the “ROI” in mind is the focus of his work for both his clients AND the agency.  During his career he won more than 300 awards. His list of awards includes Cannes, Clios, Lürzers, DA&D, One Show, Eurobest and many more.
Noumerus Swiss and European social media awards, as well as 120 Gold, Silver and Bronze Art Director’s Club awards.

In the Gunn Report 2011 JWT/Fabrikant ranked 24th in the worlds most awarded print ads & campaigns.
In addition, one of his cinematic commercials is a part of the permanent collection of the Museum of Modern Art in New York.